Ben Sheppard is the head instructor of Nanseikan and member of the Victorian Kendo Technical Committee. He was awarded the John Butler Memorial Award for his contribution to kendo development among Australian youth in 2014, and has recently attained his 6th Dan in kendo. He is also author of the blog Shugo , and his articles have been published in Kendo World and Kendo Nippon magazines.

First of all, could you tell us briefly about your experience in kendo? How did you come to know and start kendo?

As a kid I saw the first Star Wars movie about 4 or 5 times in the cinema, the only way you could see it back then! It made a big impression on me: the idea of an entire social class whose skill with the sword gave them special powers to protect civilisation. I also had a book called “Rules of the Game” which had a section on Kendo in it, so from that I learned what Kendo looked like and how it operated. This was when I was in primary school. When I was 14, my best friend started Wado Ryu Karate and I decided I wanted to do a martial art as well, but back then I thought Karate was too plebeian, so I went chose Kendo instead. I  had also seen the Kurozawa film “Seven Samurai” on TV and was reading and collecting Frank Miller’s “Ronin” comic. This was 1983.

The Melbourne Kendo Club was listed in the Yellow Pages. At the time it was the only Kendo club in Victoria and trained at the YWCA in Elizabeth St. I must have rung up and found out the training times. From memory they were Wednesday night and Sunday morning.

You have been training kendo for a number of years now. What has been your motivation for continuing kendo for this length of time?

Kendo has become a part of me. The physical exertion is necessary for me to feel healthy. The mental challenge is something I couldn’t do without. Kendo makes you sweat and gives you instant feedback on how you are doing. The example of Nagae sensei also set me on the path. From the first moment I saw him at training I had an idea of everything that Kendo was and could be. Everything I have done in Kendo  since has been unfolding from that first moment. I am still working on the last piece of advice he gave me, which was actually an admonition: “Your Kendo has no shisei!” I take great comfort from that because it  means he took my Kendo seriously. 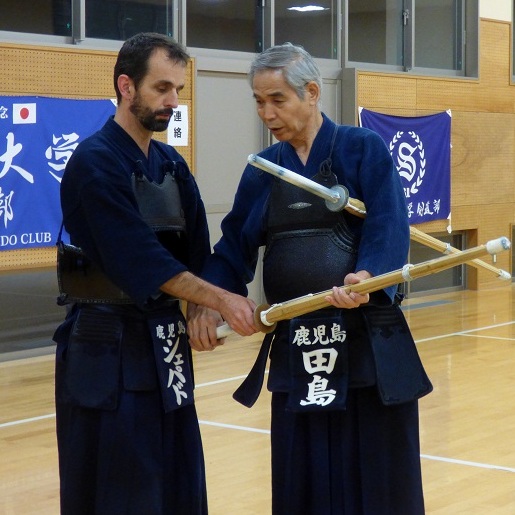 What do you find the most challenging part about training kendo?

I was lucky that Kendo came quite naturally to me, but my Kendo has a lot of ego, and this causes me to be somewhat lazy in my approach. It was easy for me to get

modest results, but anyone who is keen to work hard at their Kendo has always been able to beat me. So this is very challenging and it is a reminder that I need to set aside my ego and simply face my opponent head-on, as honestly as I can. In 2002 you founded your own club – Nanseikan – and have contributed significantly to the development of kendo among the youth in Victoria.

Has the experience of being an instructor changed your approach and thinking about kendo?

When I became a classroom teacher in a high school it was natural for me to also teach Kendo. Things have grown from there. Teaching always clarifies your understanding of something. It also forces you to think about the different ways that others have of understanding. Sometimes whilst teaching I come to a realisation about something that I hadn’t thought of before. For instance the other night at training we were working on harai waza. I hadn’t realised the connection between all the different ways of doing harai men and kote-men, i.e. with fumikomi for each strike, with fumikomi on the last strike, with fumikomi on each strike but with the left foot only kicking off (fumikiri) for the second strike. It doesn’t sound like much on paper, but there’s a real connection in practice, like a kind of progression or continuum of body movement. This sort of thing is quite common.

In your experiences, what are the challenges of teaching kendo in Nanseikan?

Students coming and going. There being no end-date. Having to set up the dojo from the mess of previous users! Administration…

I have become known for some reason as the person who teaches Kendo to young people, and in the beginning Nanseikan was only for people aged 7 to 17. But apart from the fact that some of my first students grew up and were older than 17, I had to open the club up to adults because it is impossible to run a club only for children; they just don’t stay long enough. So adults have been the mainstay of the club for about the last eight or nine years. Furthermore, there are clubs like Monash, MBK and Tora who have significant numbers of children amongst their ranks. I see Nanseikan as just being an ordinary club with a mix of ages.

What about the teaching of kendo to children? Are there any considerations or difference in approach that would be different to adults?

I tend to think that cultural differences have a bigger impact than age on how you teach someone. For instance if the child is being told to train by their parent then you don’t have to worry about fun or engagement. If the child is doing Kendo because they want to, then you need to make it fun in some way, at least until they have the maturity to understanding something of Kendo’s depths. From my experience, kids love shiai. They love to test themselves and see “who’s the best”. They can also run before they can walk, meaning that a child may have trouble remembering which foot goes in front in chudan no kamae, or be lazy about lifting the shinai above their head for every sayu-men in kirikaeshi, but in the very next breath they might perform debana-men quite expertly. What this means I believe, is that we shouldn’t always teach children the same as adults. There is a time for being a stickler for details, and there is a time to just let them be. Most instructors could pay to remember that your students take much less notice of what you say, and more of what you (and others) actually do in your Kendo.

What benefits do you feel kendo has given to you and your students?

At a slightly older age, around adolescence, students need to be pushed to find where there limits are. Then they need to go beyond them. To go past what you thought your limit was not only opens up greater potential in Kendo (e.g. I can do kote-men much quicker than I thought, I can kiai much louder than I thought, etc) it also opens up potential in other areas of your life. For instance a job interview might be less scary if you are able to reflect on a time in training when you literally thought you were going to die but didn’t, or perhaps where you trained hard and achieved a goal after a long period of disappointment.

You were also instrumental in starting the first ever Interhigh Gasshuku (training camp) in Australia. What were your motivations in doing so?

The gasshuku was devised initially to give the students of Brunswick Secondary College and EssendonKeilor College a focus for their year, a chance to meet up, a way to become part of the wider kendo community and a goal to aim towards in the form the grading. Initially I thought it would be shiai-focused, hence I used the name “interhigh” which is the name of a famous Kendo taikai in Japan. However the standard of the students was too varied and the numbers too few initially to be able to stage a shiai, so we focused on the gasshuku aspect with its emphasis on camaraderie and inspiring students to continue their training into the future.

So far it seems to be achieving its aim. At this year’s gasshuku almost half the students had been to the previous one. Several had been to three gasshuku and for one student it was his fourth in a row. Recently, the fifth gasshuku was held over the weekend of September 3-4 in West Melbourne. Could you tell us briefly about how it went? This year’s gasshuku was a great success. Fifteen young people from four different high schools attended, including one student from Tasmania, making this our first national interhigh gasshuku. The age range was from 13 to 17 years of age and five of the fifteen attendees were girls. All but three attendees took part in the grading on Sunday afternoon. All who took part were successful.

As it turned out, the weekend was an extremely busy one for the Kendo community, with not only the gasshuku and a very large kyu grading to run, but also national squad selections over two days at Victoria
University in Footscray. The latter required a great number of our senior sensei but it was a testament to the work ethic of Victorian kenshi that all three events went off without a hitch.

It is hard to know the future but I think things are looking very positive. At the moment we have a good group of primary school-aged members, as does MBK, Monash and Tora Dojo. This means there can be  junior taikai organised with plenty of attendees. Currently Japan is the number one overseas holiday destination for Australians and knowledge about Japan amongst the young is higher than ever with the  influence of anime and J-Pop. On the other hand there has never been more competition for the attention of young people. Computer games and social media are seemingly embedded in their lives, and parents are either exercising little control or are simply unaware of the potential for their daughters and sons to develop harmful dependencies on digital media at the expense of real human interaction. If we can continue to  demonstrate the benefits for mind and body of practising Kendo, I believe we can become a positive force in young people’s lives. The genius of Kendo is that the Japanese took a way of death and turned it into a  way of life.

Information on Nanseikan and their training times can be found here.